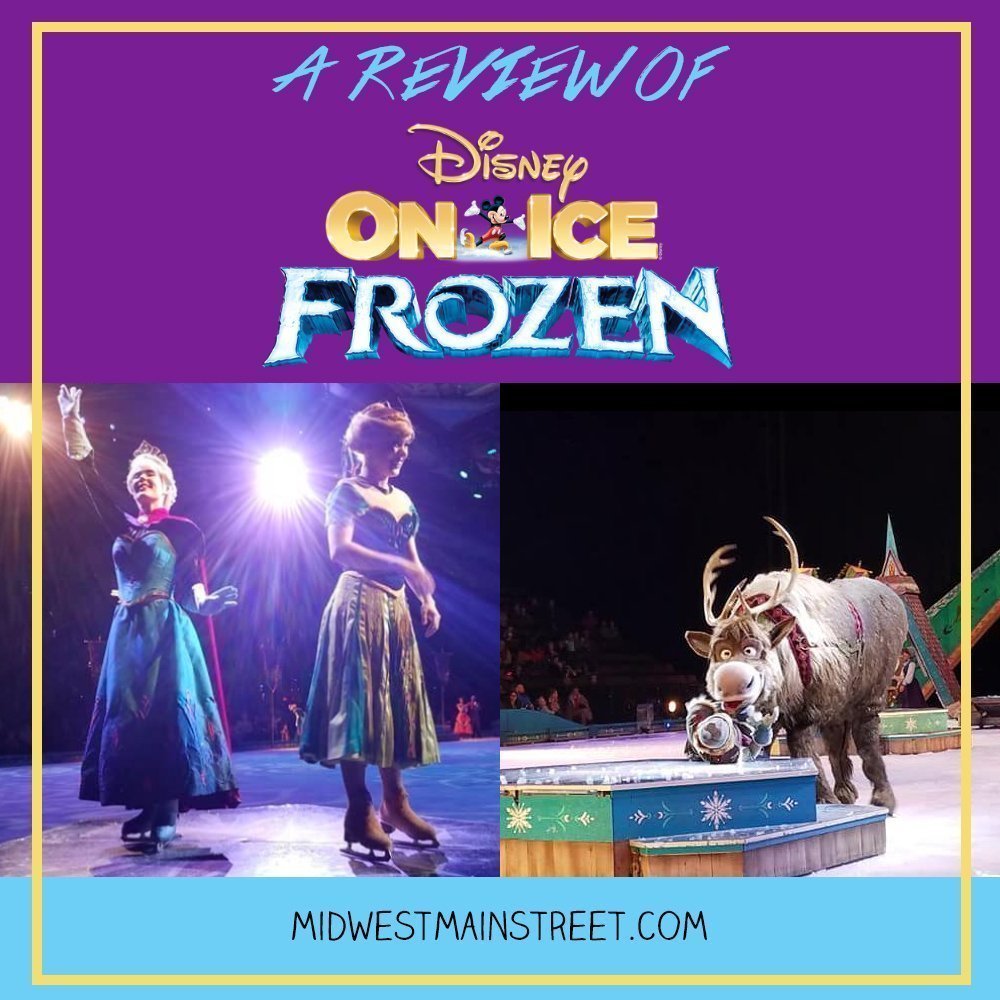 We recently had the pleasure of attending the Disney on Ice production of Frozen when it visited Cincinnati, OH March 7-10.

I hadn’t been to a Disney on Ice show since I was a child, and definitely looked forward to sharing the experience with my children.  Their generous grandparents gifted the tickets to our family of four as a Christmas gift and we were all excited as we waited for show day.

Disney on Ice is a produced by Feld Entertainment, through an agreement with Disney. Feld Entertainment also produces shows such as Monster Jam, Sesame Street Live, and the Jurassic World Live Tour. (https://www.feldentertainment.com/About/Brands/) Disney on Ice tours worldwide and there are currently 8 different productions traveling the world.

After enjoying lunch at the Banks, we walked approximately 2 blocks to the Arena. Showtime was @ 3PM, we entered at about 2:15.  We had hoped to save a few bucks by bringing dollar store glow wands, which is what we do at WDW.  No go! The reason given was it would distract the performers.  This is obviously not a truthful statement, as Disney sells overpriced blinking wands at the very same show!  Other individuals who were also stopped received a more direct reason: “Disney on Ice Branded light up wands only”. Luckily, the kids didn’t seem to mind! In addition, we were not permitted to use our Nikon camera. They allowed us to enter, but were told no photos outside of point and shoot. 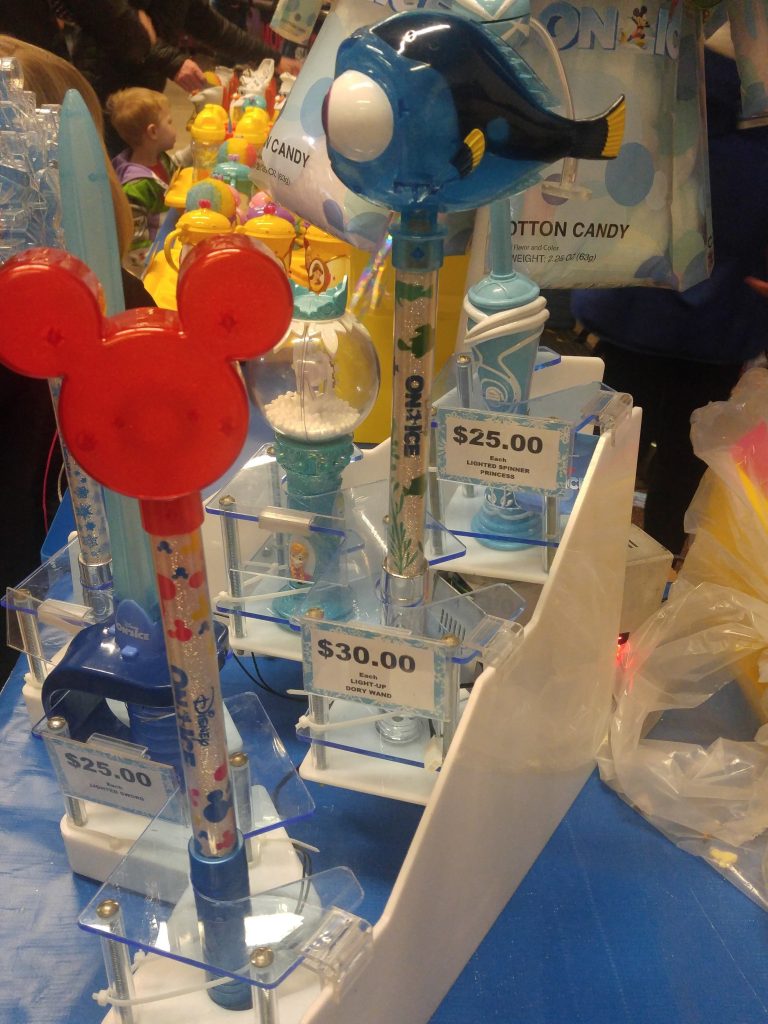 We were concerned with seating as we had seats in the “endzone” and were not sure if the show was in the round.
Luckily for us, the show does not sell tickets in the area “behind the action”, so there were no blocked views.  We were in the second row of the upper bowl, section 201, and we were very happy with our view.  Tickets prices started at $17 dollar (our ticket price!). This is a great value for families and Disney fans. The real expensives come from the concessions and souvenirs!

The show was set up with a large “Frozen” themed backdrop at the end of the rink. The outer corners of the rink had 2 small performance stages as well. In addition, there where projections on the ice itself and a circular aerial graphics screen under the arena jumbotron.

We decided to battle the concession stands before the show started. We had promised each child one treat.  They had already been reminded that we would not be buying any wands or other toys! Our daughter choose the rainbow snow cone in an admittedly adorable Rapunzel keepsake cup. Our son choose the Cotton Candy. Cotton Candy came with the choice of a Mickey Ear Gold Crown or an Olaf Hat. He choose the Gold Crown. Again, pretty cute! The total for the 2 items: $27. 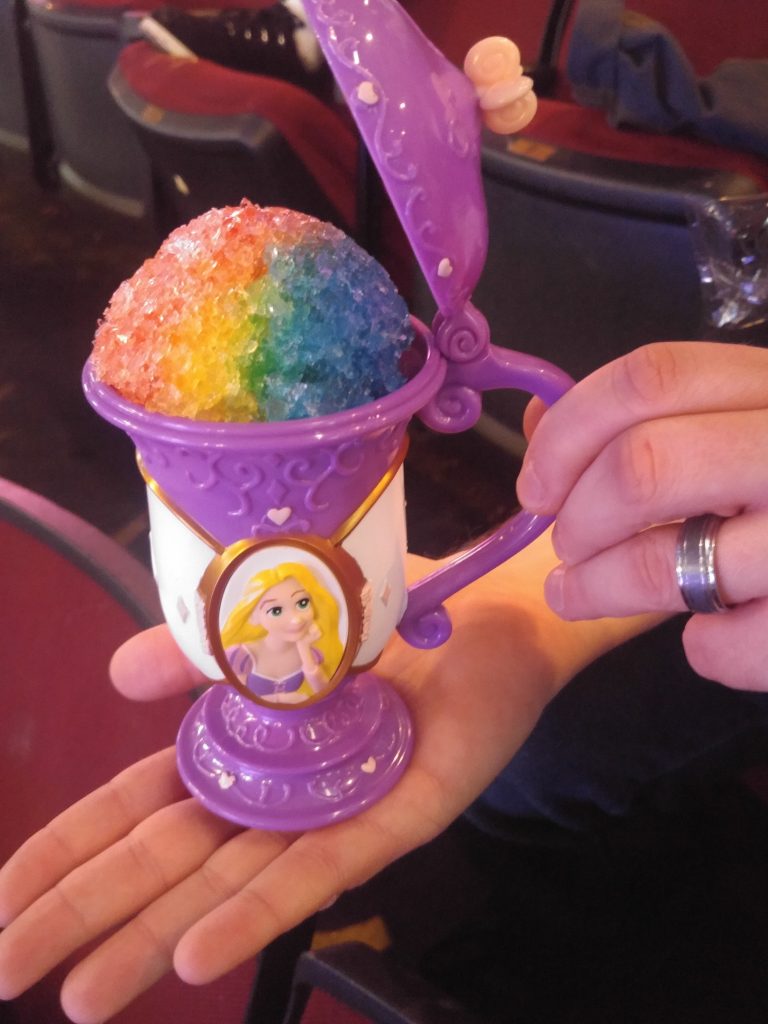 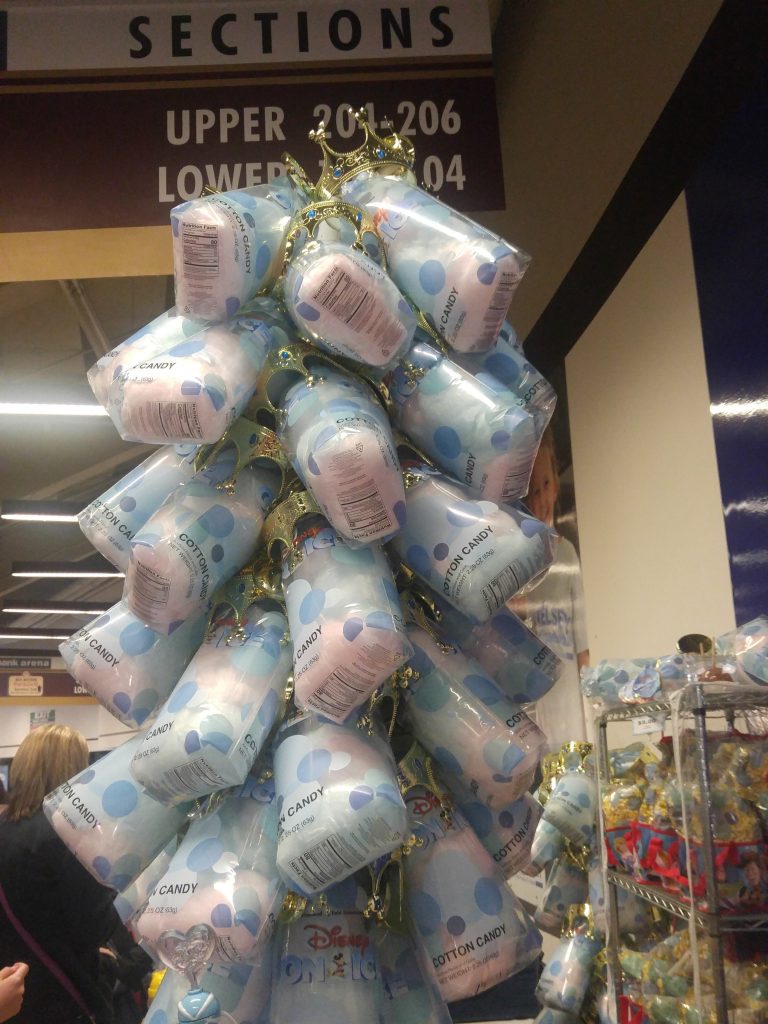 The show started with Donald, Minnie, and Goofy. We were happy to see that non Frozen characters were also included. Mickey was introduced to celebrate his 90th birthday. Other characters included in the opening number: Snow White, Ariel and Prince Eric, Woody and Buzz, Nemo & Dory, Timon & Pumba, Rapunzel and Flynn, and Cinderella & Prince Charming. 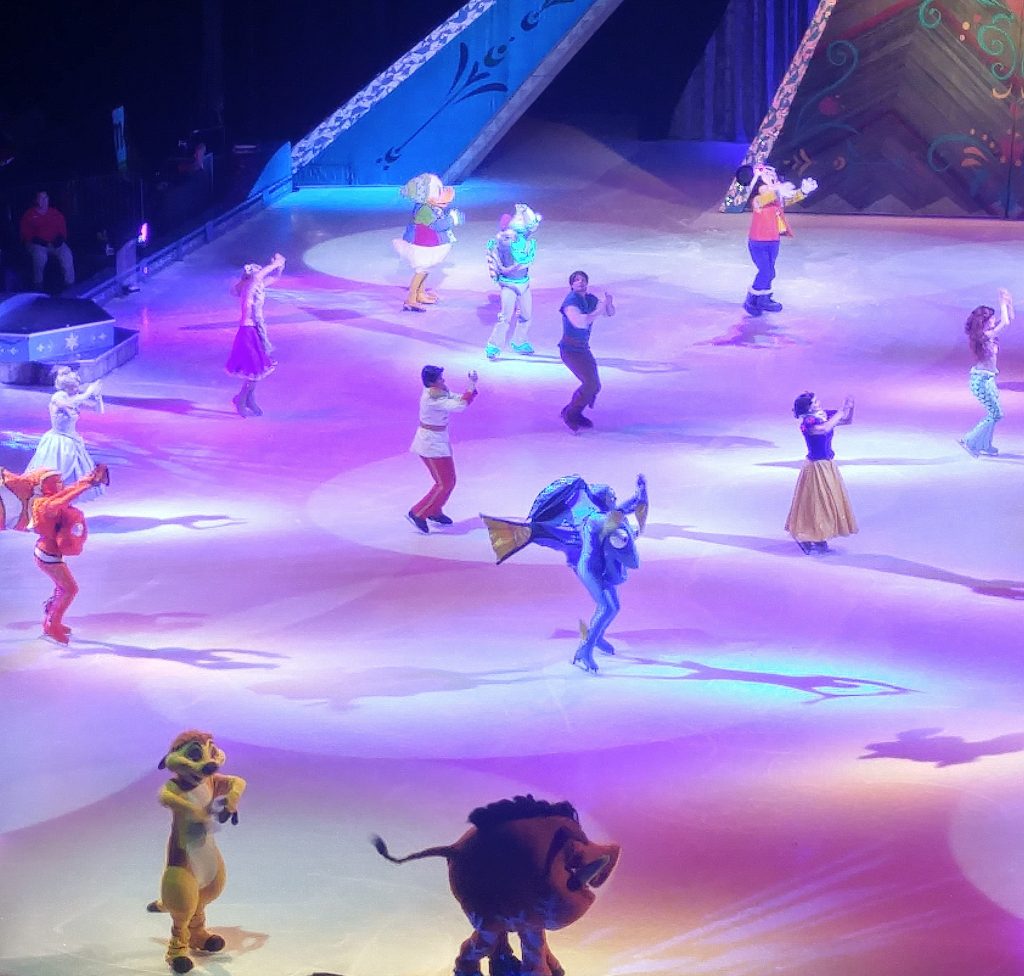 The “Frozen” portion started shortly after, just as in the film, with a young Kristoff and Sven. The show skips the “Ice” song from the movie.

The show quickly transitions to the castle in Arendelle, where Anna is waking up Elsa to play and she is struck by the magic. We then see the trolls for the first time. 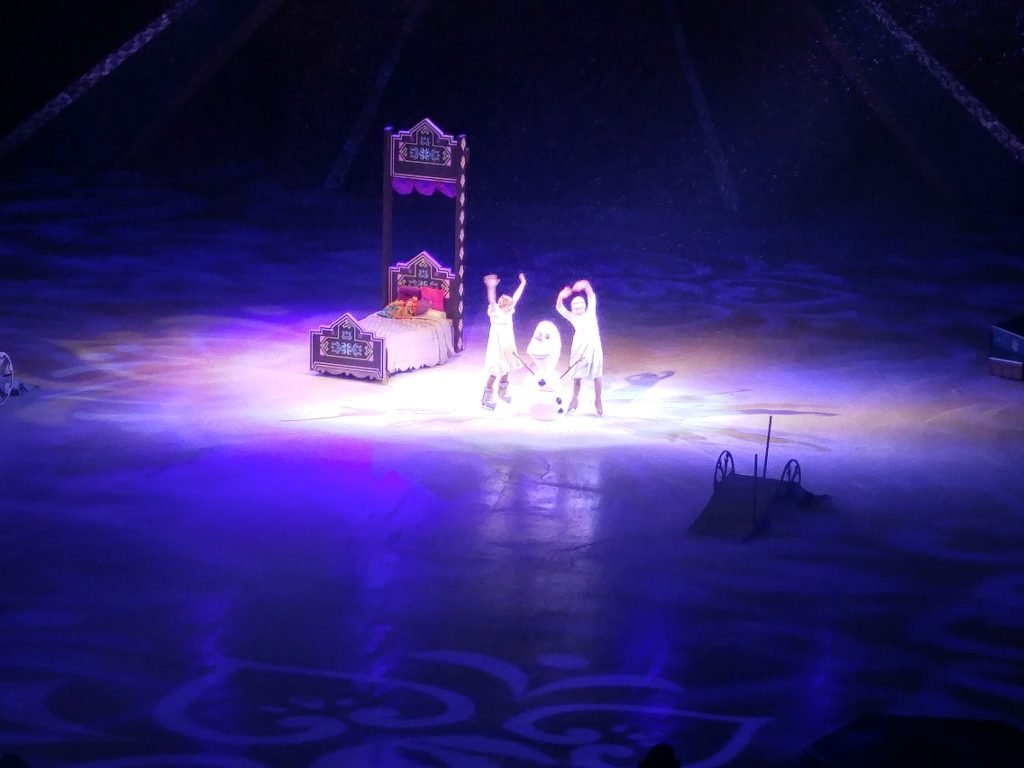 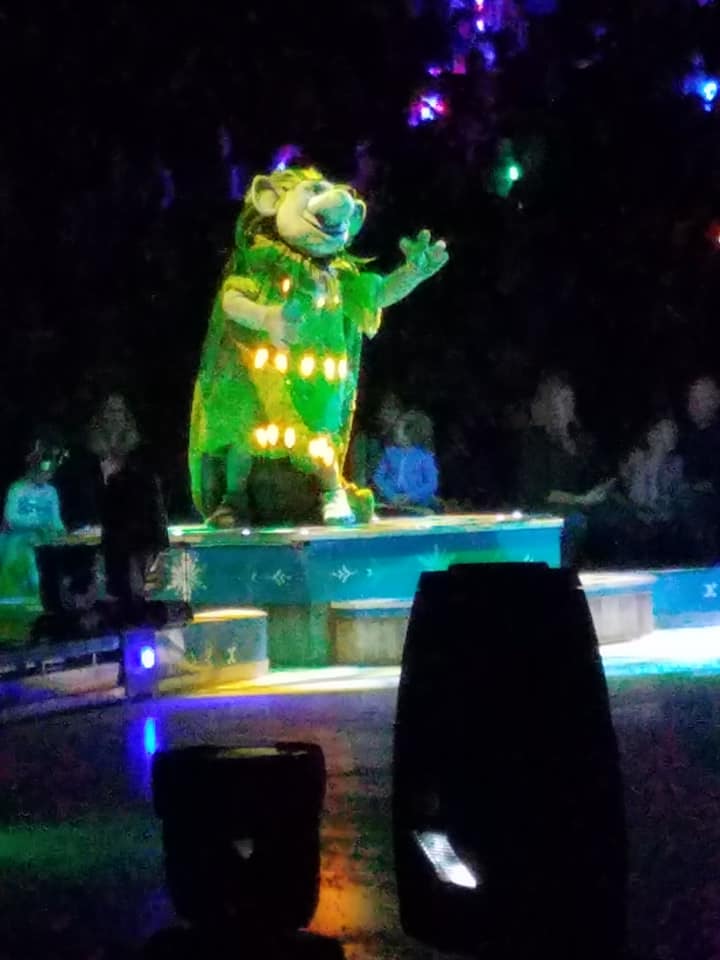 The show closely follows the movie, including music and dialogue. We meet the Duke of Weselton, toupee and all, as well as Hans. The coronation scene is beautiful and allows for a large ensemble routine. 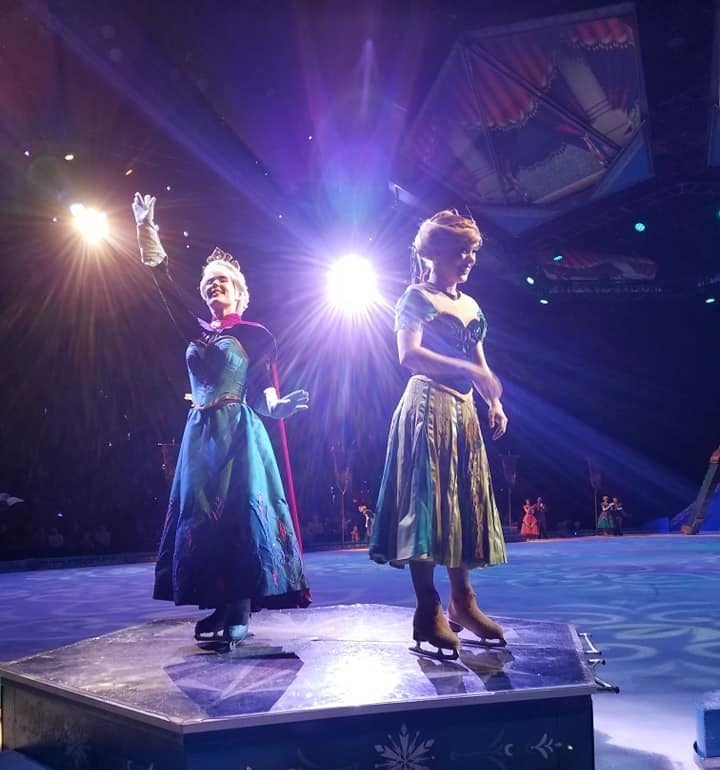 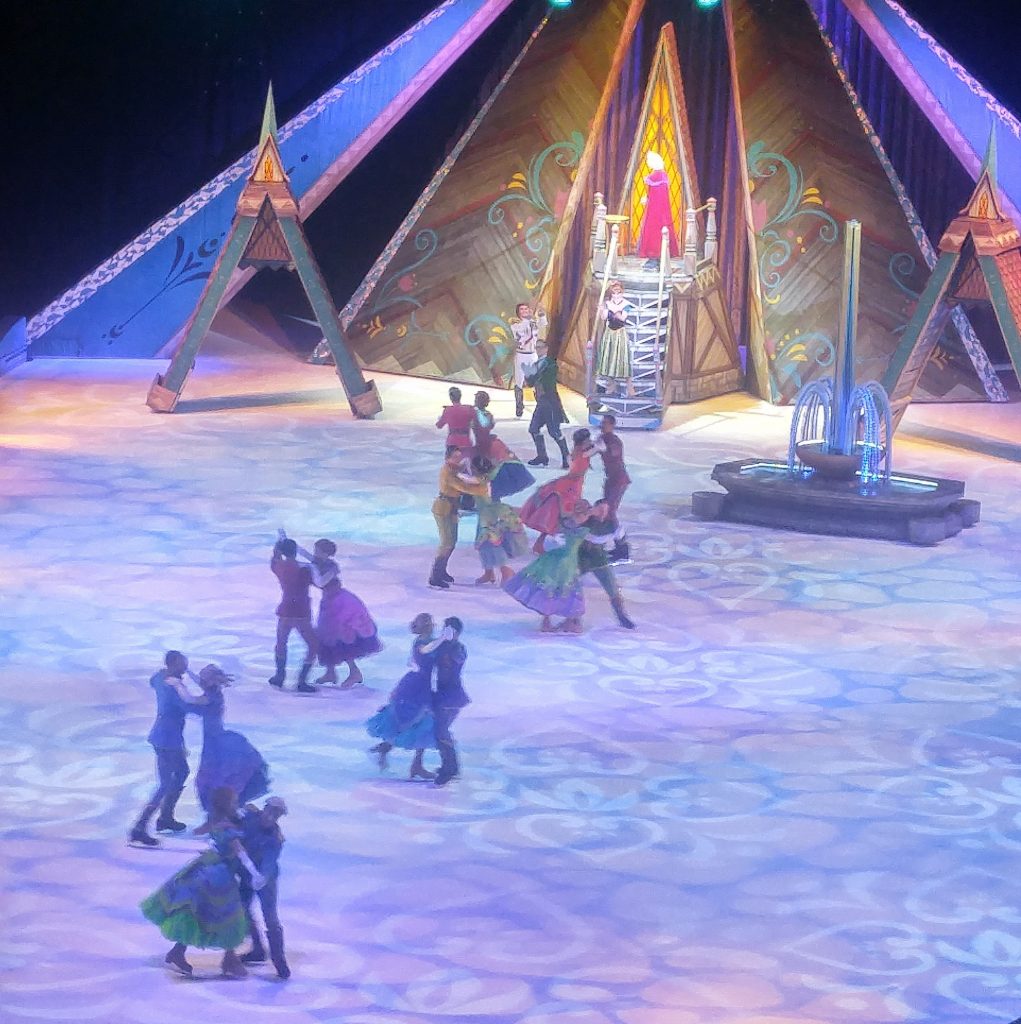 After Elsa flees the castle, we again see Kristoff and Sven, now grown. Sven is my favorite part of the show! I am amazed when 2 people can skate in a suit. The skater playing Kristoff is quite good and even performs a black flip. 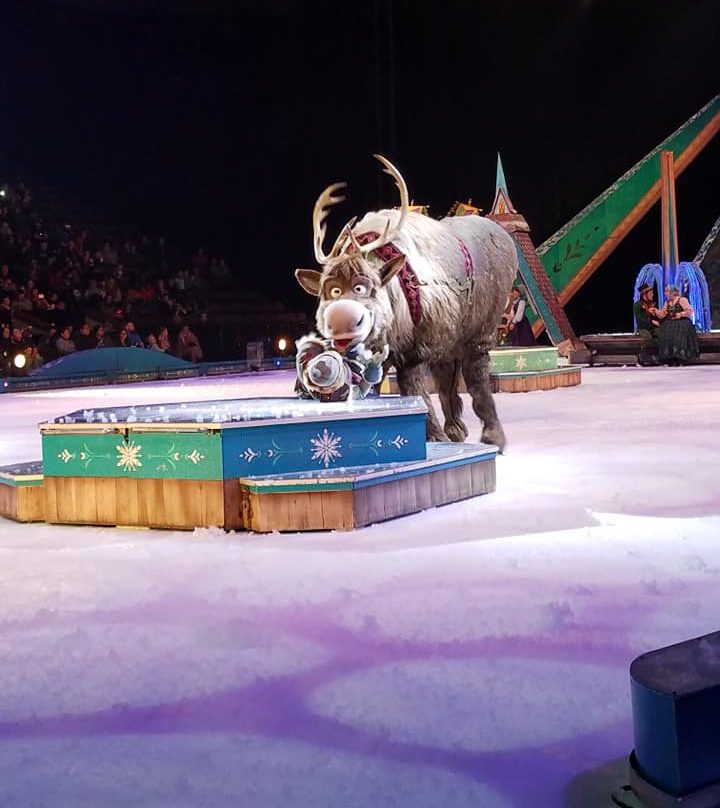 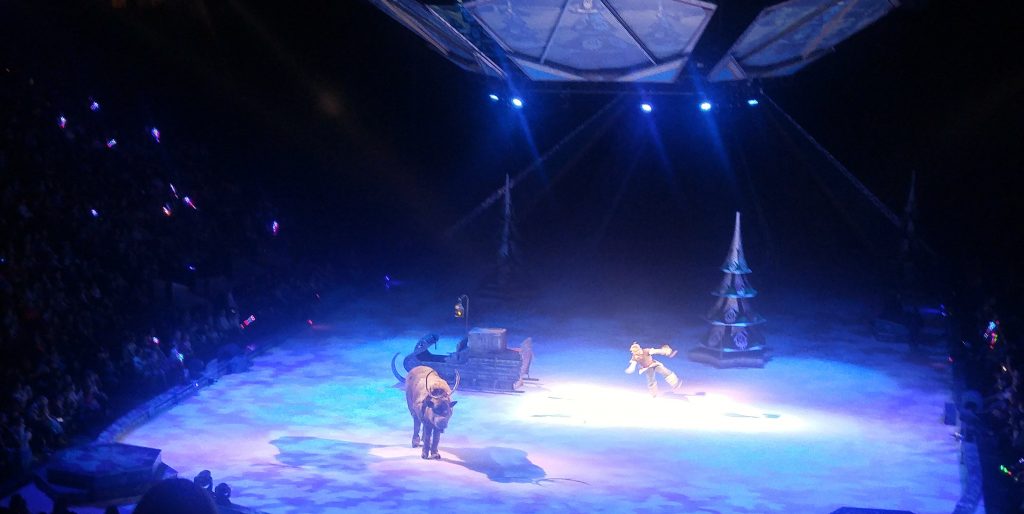 Act 1 ends with the a beautiful “Let It Go” scene. Strings of lights fall from the rafters to give a dazzling effect. 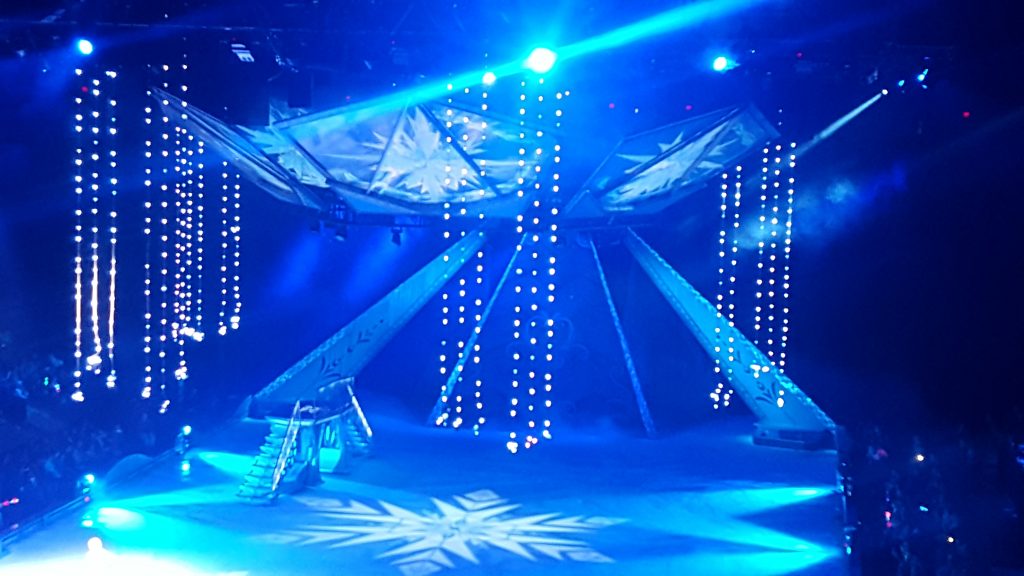 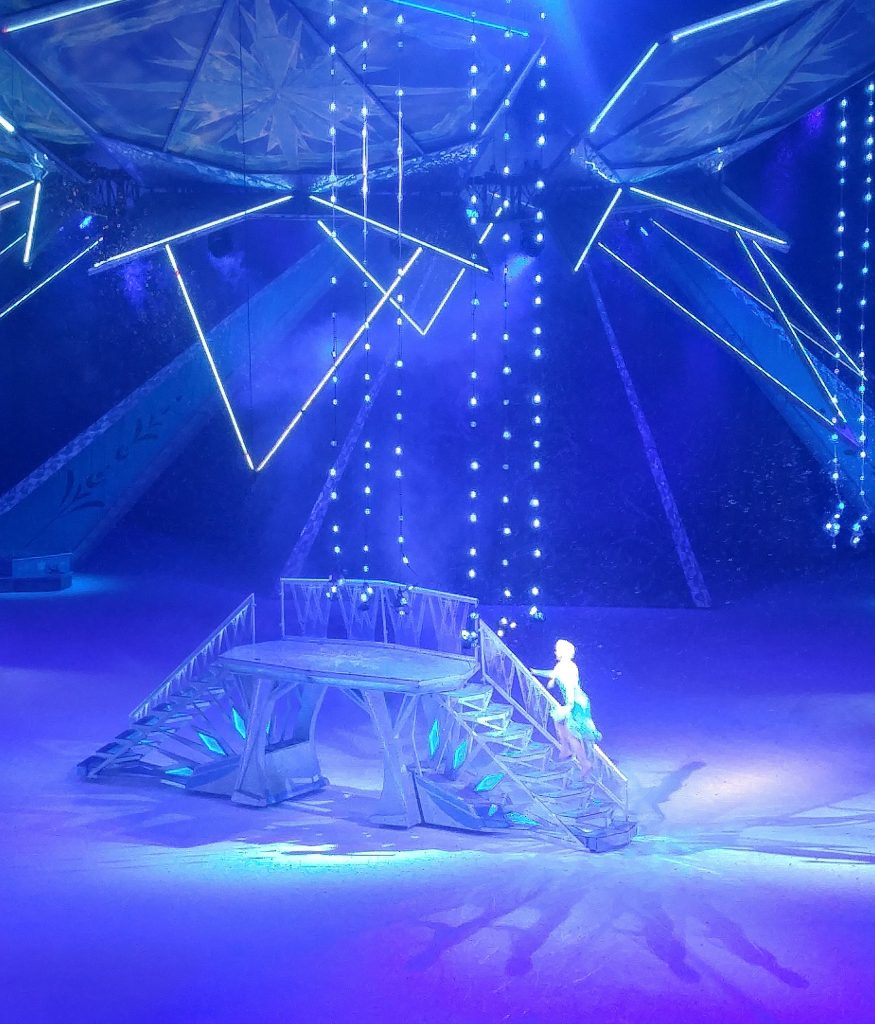 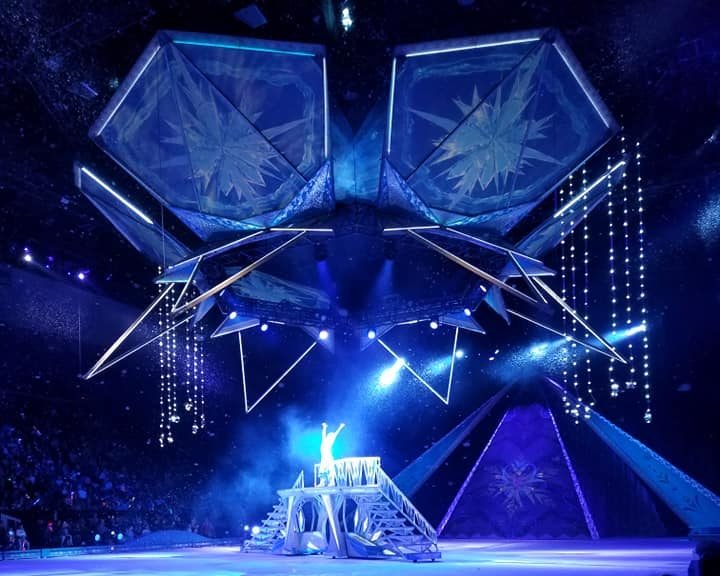 Act 2 opens with Olaf’s introduction and a colorful and fun “In Summer” ensemble performance. 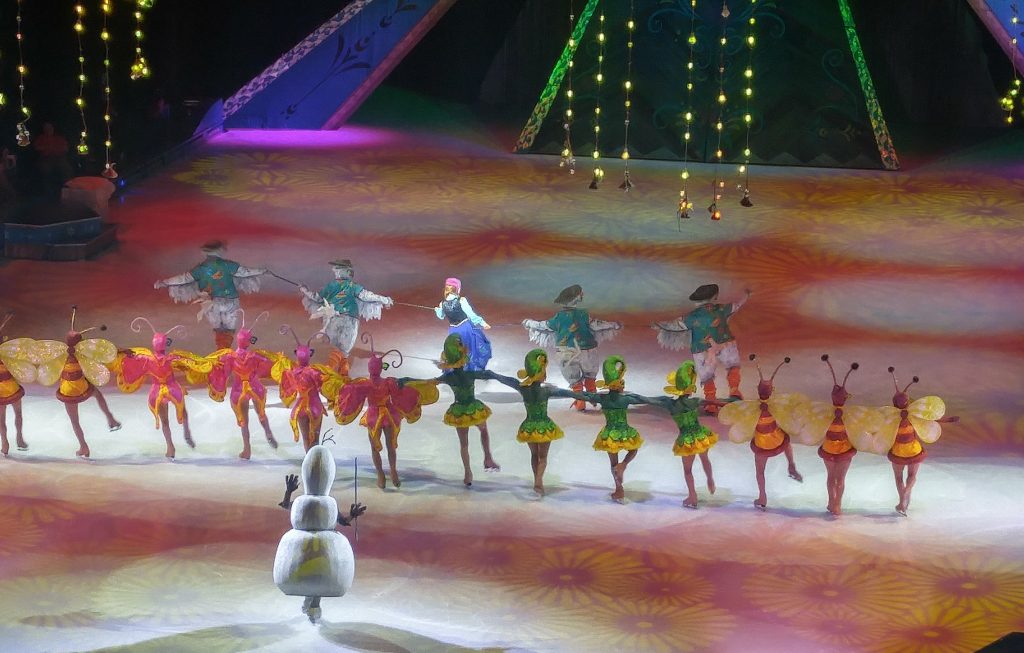 We then meet the impressive Snow Monster (according to Google, his name is Marshmallow!) 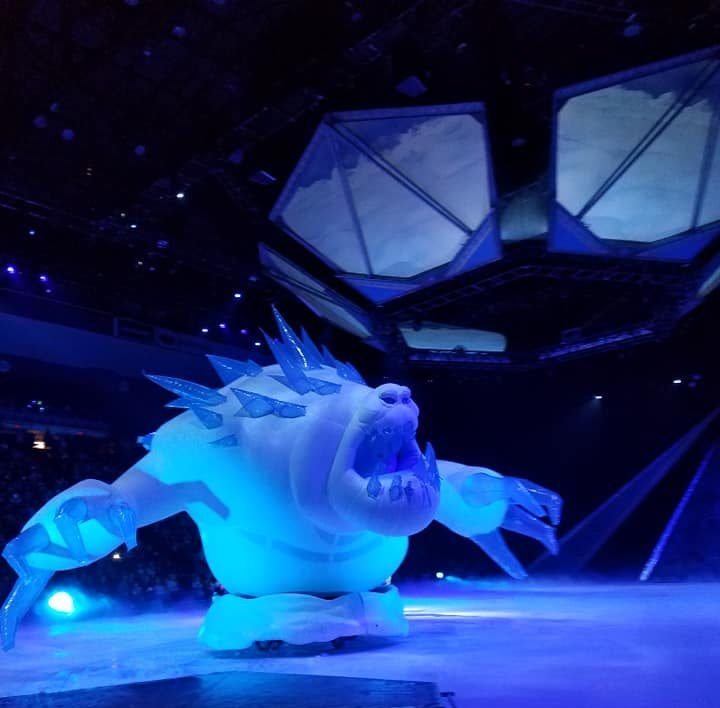 The trolls make a fun appearance “rolling” onto the stage, and perform “Fixer Upper”. 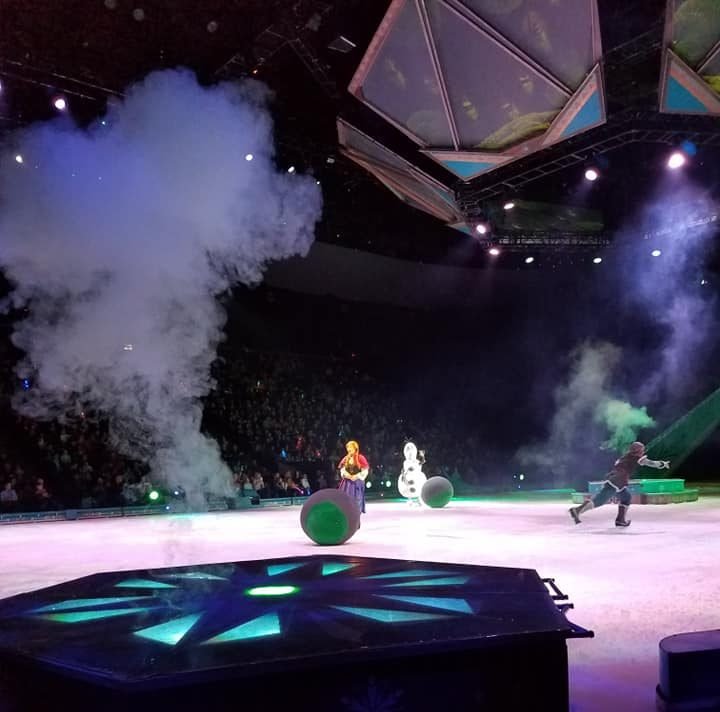 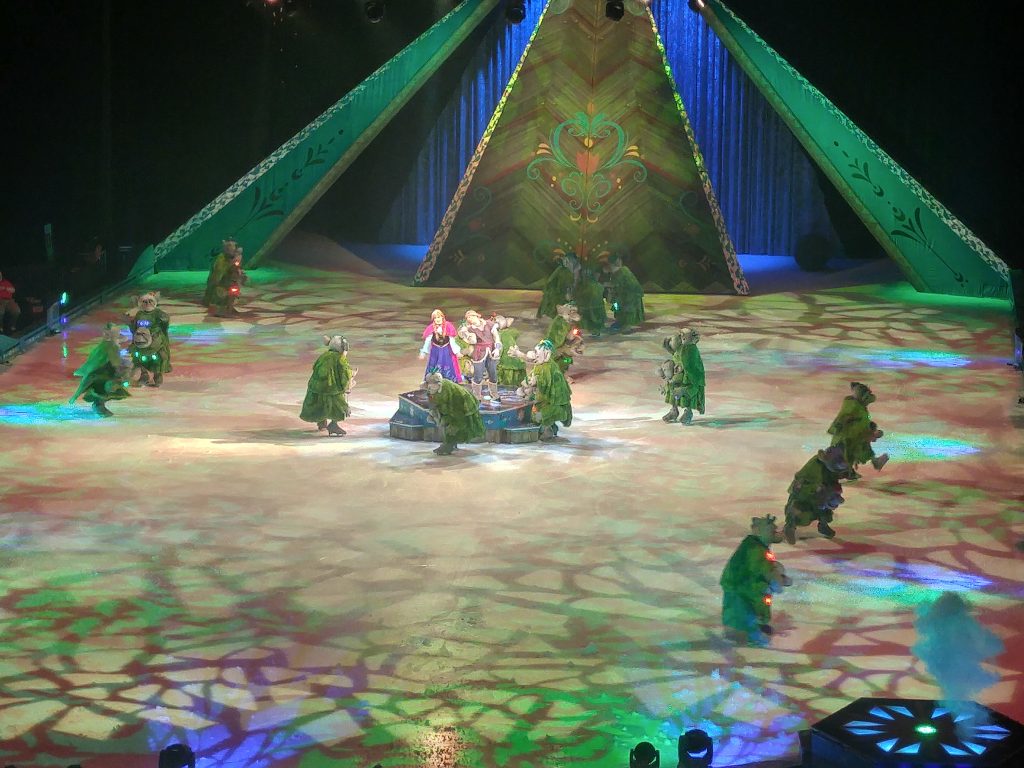 The “battle scene” blankets the rink with snow as true love wins out. 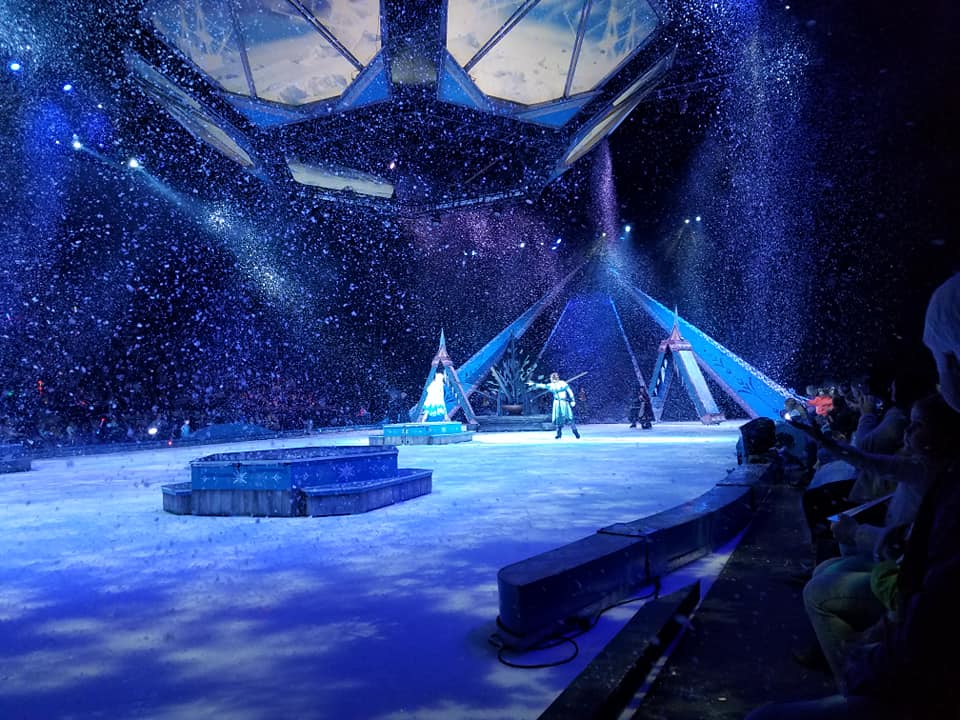 After the conclusion of the “Frozen” portion of the show, the other Disney characters make a final appearance! 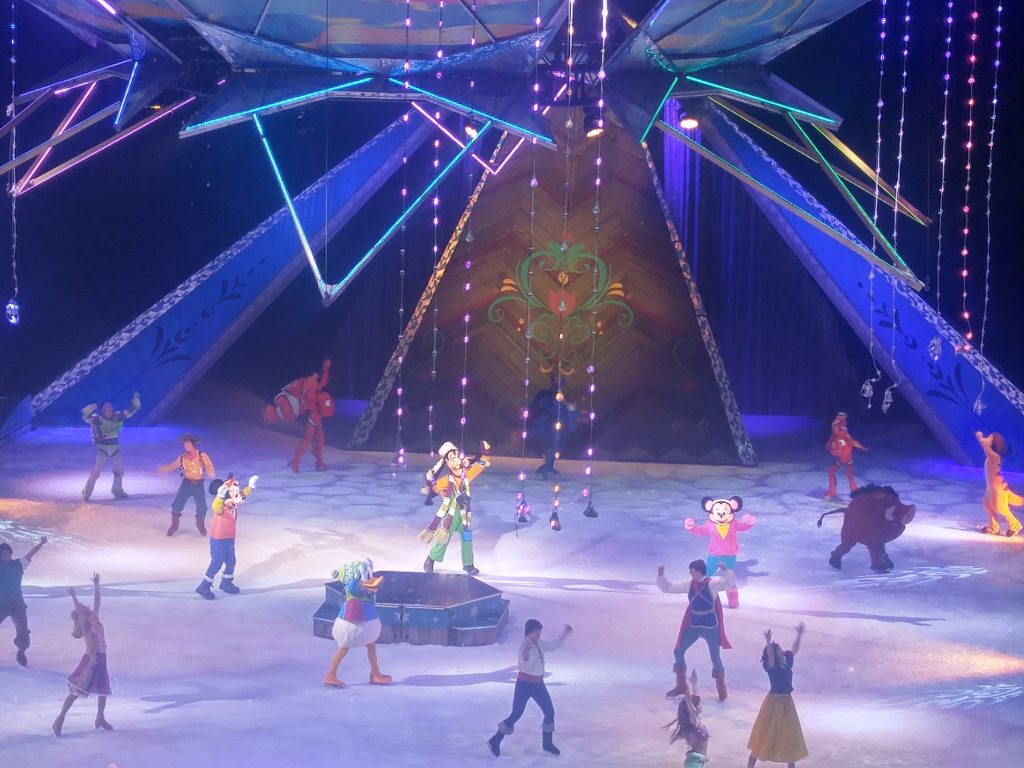 We (kids and adults) really enjoyed the show! It kept our young children entertained for the full 2 hours, which can be hard to do. Adults and children alike sang along to the familiar tunes. The music, costumes, and effects were the quality you would expect from Disney. The price, less than $75 dollars for the whole family, provides an affordable option for quality Disney entertainment. We are already looking forward to the next production!